The Madonna of the Montughi hill

> In 1940 on the Colle di Montughi, next to the Capuchin Convent, a 26-meter-high aqueduct arose, which also received criticism, because it disfigured the panorama offered by the Colle. Already in 1951 the aqueduct was insufficient for the very numerous buildings that had arisen in the area, and therefore it was believed that sooner or later this ugly structure would be demolished or possibly transformed. The occasion of the Marian Year of 1950 had made Father Michelangelo glimpse the transformation of the natural aqueduct into a "spiritual aqueduct", using it to raise a large monument to the Madonna, invoked by the Franciscan Doctor S. Bonaventura "Aqueduct of Grace”. 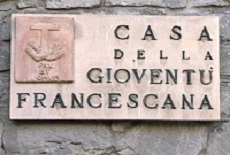 Next to the aqueduct stood, since 1951, the Franciscan Youth House, where many young Florentines had been trained for a long time under the spiritual guidance of Father Michelangelo da Montale. The National Franciscan Youth chose the Madonna as her protector, and the statue of the "Madonnina della Gi.Fra., Blessed by Pope Pius XII on April 23, 1958, to celebrate the tenth anniversary of its constitution began a long Giro d'Italia among the 450 youth fraternities, arriving in Florence in June of the same year, with great crowd devotion. These two circumstances prompted the transformation of the tank into a monument to the Madonna. The architect Leone Trenti, a gifrino and then a Franciscan tertiary, extended a project to transform the aqueduct into a monument to the Madonna, a project that was presented to the Superintendency of Fine Arts and to the Municipality for regular approval. On 11 February 1959, the anniversary of the first centenary of the apparition of the Virgin in Lourdes, the foundation stone was laid and blessed, and on 13 May, the day on which the statue of Our Lady of Fatima was venerated on display in our cathedral, the plans were definitively approved by these offices.

The courageous and difficult transformation work began, carried out by the construction company G. Berni and Figli, and followed by a committee made up of many illustrious fellow citizens linked to San Francesco, including La Pira, by friends and beneficiaries. The gilded bronze statue, built by the sculptor Salvo Benincasa according to a design by Professor Enrico Moroder, five meters high and cast in the foundry of Marinelli, repeats the Madonnina of the Franciscan Youth in large size, because on the Franciscan Hill of Montughi a Madonna was suitable " Franciscan ". At the foot, a votive chapel was erected at the same time in honor of the Madonna of the Franciscan Youth on the Florentine hills, original in its structure and worthy of the art of Florence.. The work as a whole - monument and chapel - was inaugurated in the presence of religious and civil authorities on October 4, 1960, after a week of celebrations involving young Franciscans who came from Tuscany and other regions to testify that the monument is not only of Florence, but of Tuscany and all of Italy. From its 45 meters high, the golden statue is visible from all over Florence by day and by night, where two powerful spotlights illuminate it, and from above it continues to bless the young people who frequent the Casina, and the whole city. It has been restored several times, and will also require further interventions in the short term, to continue to be "firm" in our hearts and sight.